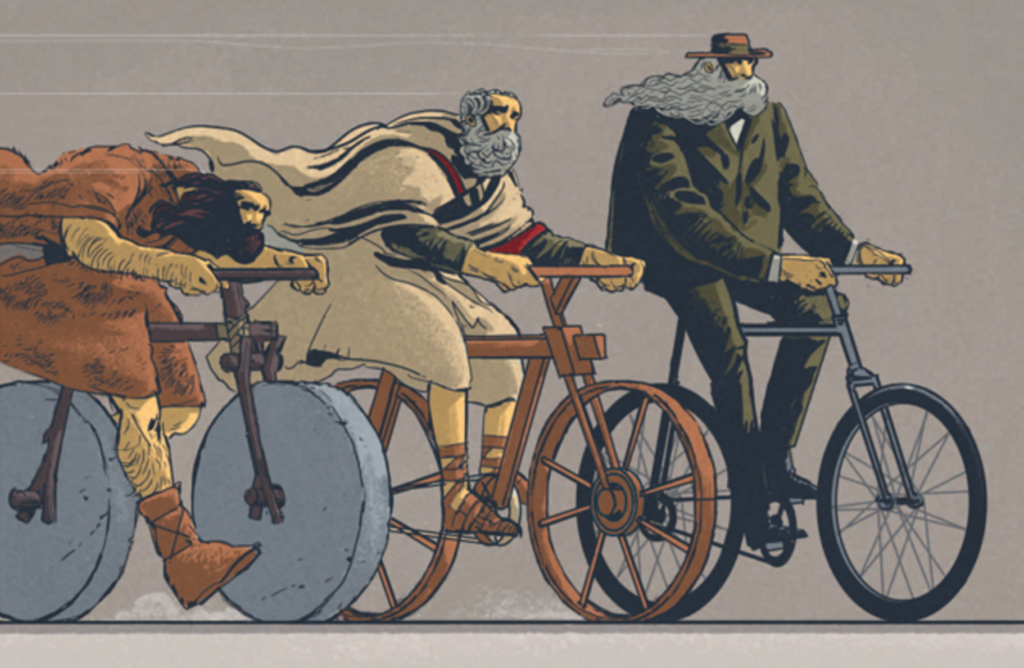 A client called me the other day and began telling me about an existing business he recently purchased. The company is well-known nationally and internationally and has had its had ups and downs. As he told me about the business and his plans for its rejuvenation, I sensed he is second-guessing his decision already, having given some after-the-fact thought to purchasing the organization’s reputation (both good and bad) along with its online presence and brick and mortar.

To summarize, he boiled his decision to buy the company—rather than launch a new version start-up—down to “yeah, well, why reinvent the wheel?”

I was thinking that in addition to coming up with new products and services, innovation is about reinventing the wheel and making it better, isn’t it?

Sam has a full-time profession, which may have him thinking he doesn’t have the time or energy to focus on a start-up. I’m just guessing. But his ideas for rejuvenating the company are innovative, and I’m intrigued. After all, when Netflix co-founders Reed Hastings and Marc Randolph launched the company in 1997 (at the height of Blockbuster’s reign) and began offering its subscription services in 1999, detractors thought they were nuts. No one thought Netflix could compete with Blockbuster. Hastings and Randolph, of course, were way ahead of the curve, having the foresight to apply technology to video rentals that allowed people to access them instantly from home. Netflix eliminated the need to go to Blockbuster to rent and later return videos, which carried late fees for procrastinators. Convenient!

Although Netflix suffered its share of ups and downs during its early years, the company went public in 2002 and has amassed a massive customer base in the years since, with more than 50 million global members and a market cap of nearly $50 billion. Blockbuster, on the other hand, filed for bankruptcy protection in 2010 and closed its remaining stores in 2013.

The good years of this business that Sam just bought are rear view mirror stuff. Now he is tasked with finding the innovator within to help him bring it back to life. When he said the thing about reinventing the wheel, I was thinking that he needs to do just that—to tap his inner innovator and breathe new life into something that no longer works in its present form, but could probably have a wide audience with the right improvements.

He has some good ideas, and I think he would benefit tremendously from an incubator. I will make that recommendation when next we speak. But anyway, if it’s not already obvious, I think it’s time to address why the wheel needs constant reinvention, and why innovators prove this theory to us again and again.

Our society seems to have an almost innate notion that everything that needs inventing is already serving its purpose in our daily lives, no need to “fix what’s not broke.” Imagine if that were the case when the first cell phone, desktop, laptop, or heck, the identification of the double helix structure of DNA were developed. The double helix was identified way back in 1953, and thanks to decades of innovative researchers, today it’s used daily to capture violent criminals and spare us all the time sink that is Ancestry.com.

Reinventing the wheel
Just the term “reinvent the wheel” is such a standard part of our lexicon, often used to suggest that an innovator is trying to overcomplicate an already viable product or service. Yeah, tell that to the poor soul who was stuck with a broken leg back in the days when crutches were a new invention. Even fairly modern crutches can cause the pain equivalent of the injury or condition that warrants them.

Now there are “hands-free” crutches invented by a guy who had a terrible time with them when he broke his leg and wanted to find an alternative to the pain and inconvenience of conventional crutches. He “reinvented the wheel!”

I say go ahead, please, reinvent the wheel! Make it lighter, stronger, faster, less painful to use! Make it smaller, more functional and prettier if possible (not a requirement) and watch us fall in love with it and decide we can’t live without it.

This article from Chris (“I was one of those Apple People”) DeSalvo, one of the early pioneers of the Danger hiptop (re-branded as the T-Mobile Sidekick, Mobiflip and Sharp Jump), the first always-on, internet-connected smartphone. Mind you, those were the days when electronic devices were so lame, everyone bought the newest version of the most talked-about gadget just in the hopes that they could at least store their grocery list on it.

DeSalvo writes, “We…started development of this new thing. We weren’t exactly sure what it was going to be, but we all knew that we wanted one. Since there wasn’t really anything in the marketplace to model ourselves after we just built the thing we all wanted to have in the hopes that other people would share our enthusiasm and want one too.”

Chris’s article is a great, fun read, and a fantastic walk down memory lane in full early tech mojo (even if you’re not old enough to remember those heady days of floppy disc drives and the DynaTAC 8000x mobile phone). One gadget or system or lifestyle benefits from what developers have learned from the last one, each cannibalizing the “old wheels” and adding new and better technology that was developing almost as fast as the devices. It was a new world, and it changed, literally over night because of innovators who were never satisfied with the old wheel, and consumers who demanded more!

Innovation isn’t only about new ideas or objects, In fact, innovation frequently emerges from something old and familiar—just look how many times the wheel has been reinvented (I couldn’t find any stats on that, but my guess is it’s a real lot of times).

The point is that everything can withstand improvement. Fact is, it’s often difficult to breathe new life into old things and ideas, but it’s even harder to think up something entirely new.

Finding new ways to solve age old problems is the ticket—like how to spread cold butter on bread without tearing the bread apart (an ingenious butter spreader is the answer, with in-built holes for easy smearing); self-driving cars, biometric security devices, the peanut butter jar that opens at both ends so consumers can scrape every last bit out effortlessly. Innovation is everywhere, and it’s usually solving old problems.

Being innovative can simply be finding a solution to everyday problems. Ask yourself the question, “How can I improve on….?” After all, it’s not about who did it first, it’s about who does it best.